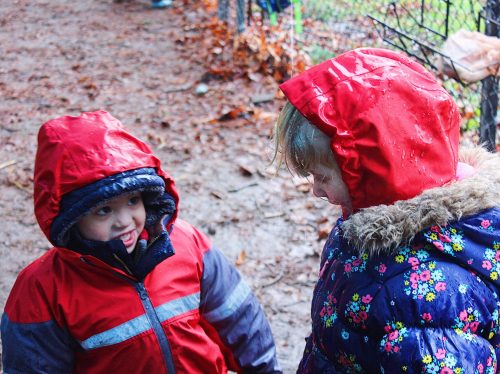 *Editor’s Note:  Our Family Empowerment Coordinator, Veronica, went out to one of our Parks to observe how the children learn from each other and the environment around them to write a learning story.  Learning stories are a form of documentation inspired by the Reggio Emilia philosophy.  Learning stories are written directly to the children in the form of a letter.  Responses to these letters, particularly from family members and other educators, are encouraged in the comments below.

I had so much fun with all of you when I had the opportunity to sub for Teacher Rachel.  So, I went to visit you and learn from you on Monday, when the first snow hit Seattle.  It was cold, and yet you all came with smiles on your faces, ready to work and learn.

I watched as you all planned in your small groups, the Earthworms and the Pill Bugs, deciding on areas to spend your time.  I found it curious that for many, the area did not matter as much as the people who would be playing in that area.  When Roman chose a place to play, Cameron, you listened intently because you knew that you wanted to play together.  The same happened with Charlie and Grey!  This tells me that in the short span of three months that you have all been together, you have really built strong relationships with the kiddos in your classroom. 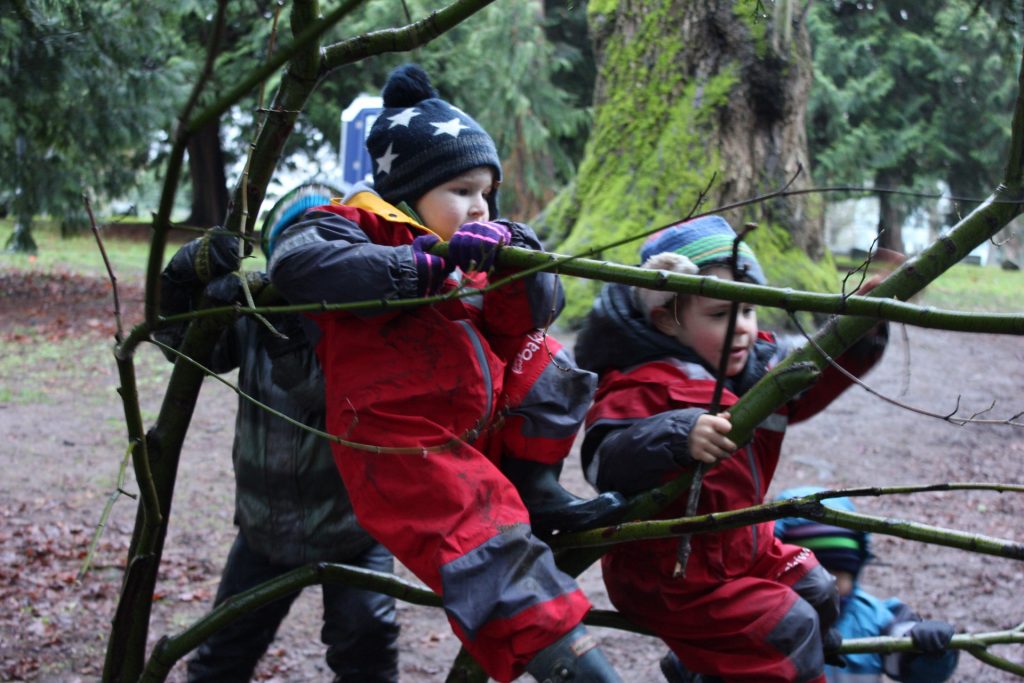 I was in awe of how deep bonds were between so many of you, so I wanted to focus on and observe the dynamics of the relationships you all had.  That’s when I heard you, Logan and Esther, laughing with one another.  You were both experimenting with the integrity of your rain suits, using the water that was draining from the tarp overhead.  You let the water fall on your hood covered heads, on your boots, on your legs, anywhere you could.  Esther, you even tried it on your knit cap, which you soon discovered would not keep you dry.  You were laughing and smiling with one another the whole time, testing out different parts of your suit wordlessly taking turns.  It was interesting to me that both of you found each other through this experience, to share the joy that this opportunity brought.  In my previous visits, I did not really see you two play together too much, and yet here you were, playing seamlessly with few words but sharing in the joy and wonder of it all.  It spoke to me about the mutual respect that not just you, but all your friends in the classroom, have for one another.  It also demonstrated the connection that you are forming with nature and the spontaneous opportunities for learning that it brings.

Esther and Logan, you made such an amazing game out of water that was dripping from a tarp.  You both have such joy and ingenuity.  You both were having so much fun, but eventually became aware that, as much fun as it was, the water was cold on your bodies.  So, you shifted in your work, making more about how to gather the water that was falling from the tarp.  You experimented with making mud pies and mud soup.  Again, practically wordless, in focus, and seamlessly.  There is something magical about connections, like the one you had today, where you can work with someone in tandem, where the focus is so strong that there is little communication aside from the unspoken goal you have in mind.  I did not know what you two envisioned until you each came up to me.  “Here’s your pie,” said Esther.  “And here’s your soup.  Try it!” exclaimed Logan.  I accepted graciously, all the while I was really stunned and amazed by what you two had done.  I watched your game, from start to finish, and you two never told each other that you were making food.  Yet somehow, you both arrived to a mutual goal and created this feast for me.  As I lifted my spoon to try the soup, Logan, you told me, “but don’t really try it,” which made me really laugh.  Thanks for looking out for me.  Thank you, Esther and Logan, for the delicious mud pie and mud chicken noodle soup. 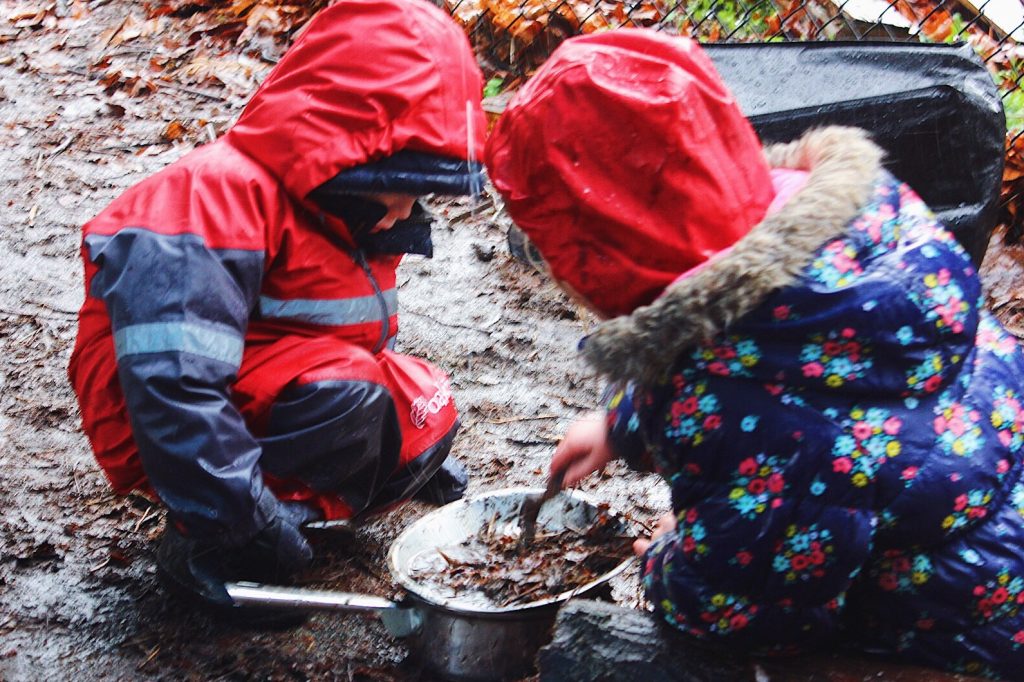 Right when Logan and Esther’s game was done, I heard another set of giggles behind me.  It was Charlie and Grey!  You two were having a hug fest.  You two were laughing for so long, just happy to be in each other’s company.  It was truly sweet to see!  I had noticed you two walking along the classroom together all day, and you worked together so well.  When you were done with hugging, you both went to the sand area to dig.  I saw you both looking around, so I asked, “do you need any help?”  “We’re looking for buckets,” said Charlie. “But there are none here,” added Grey.  “Hmmm, I usually see more buckets by the mulch pit.  Should we look to see if there are any there?” I asked.  “There are but there’s only one,” said Grey pensively, adding, “but that’s okay, I can share my bucket.  We work together.”  That was the moment that I knew that you both had a great friendship.  Grey, you knew that there was a certain number of buckets available to everyone, and you were willing to put your relationship with Charlie first in deciding to use the materials together.

You and Charlie ran excitedly to the mulch pit to look for buckets.  You both were even more excited when you found out there were two buckets.  However, even when you had found a bucket for each of you, you worked together to fill them at the sand.  You were done with that shortly after, and walked along the classroom to scout for more to do.  Grey, you decided that you wanted to decorate and make a party tree.  You and Charlie worked diligently to hang beaded necklaces, scarves, and instruments on of the low hanging trees.  It looked beautiful.  You and Charlie did such a great job decorating the tree!  Although I never could get close enough to hear the exact words, it was clear to me that you both communicated with each other well.  You both listened to each other well, listening to directions when one of you pointed to what needed to be done.  Your communication was joyful, you two were always smiling when you were talking to each other. 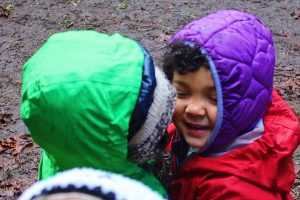 These are just a few snapshots of how well you ALL work together.  It brings me great joy to watch as you all grow as a community to children learning together in nature.  I cannot wait to be in your classroom again and learn from you all.