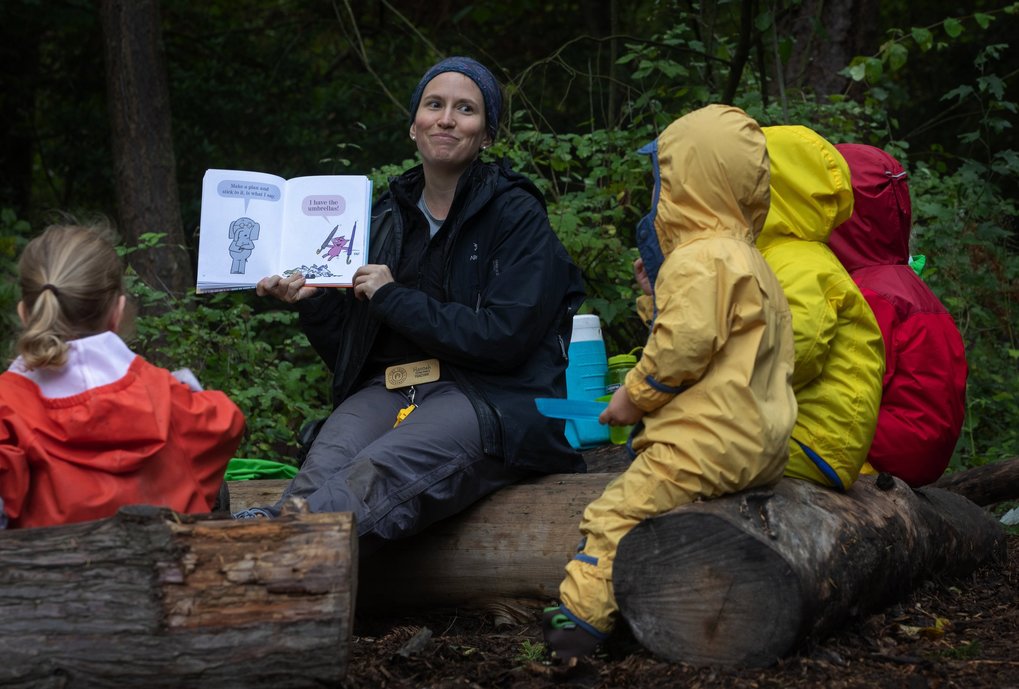 It had just stopped raining, and 4-year-old Jane Theumer was still wearing her yellow waterproof jacket and matching duck boots.

“I feel like my cheeks are cold,” she said to her preschool teacher, Hannah Kinney, as her class embarked on their daily hike through West Seattle’s forestlike Camp Long.

But once on the trail, Jane’s thoughts turned to other things, as she stopped to inspect a clump of white mushrooms on the side of the path and later checked on an orange slug her classmates were crowded around.

It was the second week of the new school year at Tiny Trees Preschool, one of the state’s outdoor early education programs — where instead of gathering on a colorful rug inside, kids sit on tree stumps and go hiking through the woods. The preschool takes place entirely outdoors from September to June, rain or shine.

“There’s a beauty in being able to see kids run outdoors and look at slugs and take care of plants and animals,” said Kinney, who used to teach at indoor schools in Michigan. “You do see students that need that space to move their bodies and feel like they have that choice and ownership of their learning.”

Kinney teaches two outdoor preschool classes at Tiny Trees — a four-hour class in the morning and a three-hour class in the afternoon — and her students, mostly 3- and 4-year-olds, are thinking about their relationship with nature more, she said. They’re checking in with their feelings and emotions more. They’re more creative with the space they have, she said. And yet they’re still practicing and learning all the same things traditional preschoolers do.

Because the idea of outdoor early education is catching on nationwide, Washington launched a pilot program in 2017 to develop official requirements that all licensed outdoor preschools must follow.

But over the past two years, the Washington Department of Children, Youth and Families has worked on creating new guidelines specifically for outdoor learning, which has slightly different regulations than indoor schools. One new standard requires each classroom to have one teacher for every six kids, so most classes have two or three staff members. Other guidelines detail how to implement naptime, or what to do when it rains.

“We do have a canopy that we put over the sign-in and class area,” Kinney said. “Otherwise, they play in the rain. They’re provided with good rain gear … And if the weather gets to a point where it’s unsafe, we do have options to go inside.”

At Camp Long, the Tiny Trees class can escape to an on-site lodge if the weather gets too hot or cold, she said. Other classrooms have community centers or covered picnic areas.

This fall, with the new regulations in hand, the state finally started to officially license a few programs, becoming the first in the country to do so.

“Being outdoors is beneficial to all children,” Yair said, “but for some families specifically, it’s a really good fit for their family or child. It gives them that option.”

So far, Jane has loved Tiny Trees, her mom, Nika Cull, said. Because the outdoor preschool model encourages so much movement, it exposes the kids to different sorts of experiences in nature, she said.

“My kids have the rest of their lives to sit in a chair and listen to someone talk,” Cull said. “Childhood is so limited for things like playing and climbing trees and going on hikes. There’s so much foundational importance interwoven into these activities … And it just lets them be kids for as long as they can.”

But while the state pushes forward to promote outdoor learning, some families have voiced worries about the idea.

“Number one, weather,” said Amber Fyfe-Johnson, who studies health and education at Washington State University. “But if you dress kids appropriately and keep them active, they’re fine … And the second concern I hear is about kindergarten readiness or academic metrics — are there schools preparing kids for kindergarten?”

This is why Fyfe-Johnson recently launched a project exploring the effect nature-based early learning has on children’s mental and physical health.

Over the next five years, she plans on partnering with Tiny Trees to track children’s academic growth, physical activity, body mass index, sleep and digestive health, she said.

Previous studies, she said, have suggested that kids are twice as physically active outside as they are inside. Her goal is to offer more evidence that outdoor time is crucial for children’s development.

Plus, she said, the day-to-day lessons in an outdoor class aren’t really that different from indoor ones.

In one area of the “classroom,” there’s a spot set up for kids to experiment with magnifying glasses and magnets. There’s also designated areas for reading and imaginative play (filled with building blocks and plastic foods). And another space is sectioned off to protect the park’s native plant species, which the students learn about too.

“I don’t feel like we’re missing out on anything,” Kinney said. “And some kids just need a different environment.”